In 1964, Congress began putting aside money from offshore oil and gas drilling revenues to support the protection and conservation of our land and water. The program was named the Land and Water Conservation Fund (LWCF), and it has become our country’s premier outdoor conservation program – with $900 million from drilling leases dedicated to the fund each year (though it’s been shortchanged during the last few decades).

Some of that money goes to a federal conservation program, and the rest helps individual states develop their outdoor areas – like the numerous natural gems we enjoy here in the Pacific Northwest. Those funds contribute directly to some of our most treasured areas in Southwest Washington, such as improvement of the Julia Butler Hansen National Wildlife Refuge. That scenic area was created by the LWCF, and it protects endangered white tail deer in tiny Wahkiakum County along the Columbia River. Other money has gone to the implementation of Stream and Fish Habitat Restoration in Southwest Washington as well as the Pacific Northwest in general.

But now we have a problem.

The House of Representatives wants to reduce the LWCF’s funding by a whopping $393 million – taking away protection that our precious outdoor areas desperately need. The program already has projects that have yet to be completed, and this funding proposal would barely cover those previous goals – much less future ones.

That’s why we need to band together and convince Congress to restore these crucial funds.

Here in Southwest Washington we enjoy countless outdoor areas, ranging from the Willapa National Wildlife Refuge, to the stunning sites in Battle Ground Lake State Park. Fish habitat projects in the East Fork and North Fork of the Lewis River System. Our communities deserve the breathable air, safe water, restoration and improvement of streams, fish and wildlife habitat and scenic landscapes that define this region.

To ensure that happens, we need to stand up and make sure we secure the funds to keep these vital projects moving forward.

Contacting the House of Representative Person in your district will sent an important message to our representative is Washington D. C.

Your can find more detailed information about those funds in your state at:

One of the most important things that Congress could do to improve the effectiveness of the funds allocated is to require multiple year “results/outputs” monitoring of all programs and projects, regardless of size. Monitoring must focus on short term and long term outputs (results) and not inputs (such as dollars spent, number of miles, or structures built). In the case of fish restoration project money, the question is – where are the fish? Did the project produce more fish over time?

On Feb. 11, 2010 the judge said the Habitat Conservation Plan (HCP) that everyone was using to justify gravel mining adjacent to the East Fork and in the river valley bottom was FLAWED and remanded it back which likely means “go back and do the analysis again and do it right”. And as we have argued, if it were done right by the state and federal agencies involved, it would show that because of the impact on the river, water quality, river water temperatures, and the 4 species of federally “Threatened & Endangered” fish, further expansion of the existing previously mined Daybreak site — cannot be justified.

Fish First and Friends of the East Fork are not against gravel mining, but we are against mining in the river valley. We get along quite well and cooperate with other local mining companies who are high up above the river on benches and filter and recycle their grinding slurry water. Clark County is part of the huge “Missoula Flood” outwash from the Columbia River and there are large gravel deposits in many places well above the river valley bottom.

J.L. STOREDAHL & SONS Versus FRIENDS OF THE EAST FOR, et.al. US DISTRICT COURT:

The federal district court has held that NMFS and Fish & Wildlife Service violated the ESA when the approved a Habitat Conservation Plan (HCP) for expansion of the Daybreak gravel mine owned by the JL Storedahl Company, which is next to the East Fork Lewis River. All of Storedahl’s land use permits for the mine expansion were based on the HCP, so this decision puts in question the validity of the other permits that have been issued for this project.

This also was an important part of the County land use decisions, which relied heavily on the HCP.

Clark County and Vancouver-Clark Parks and Recreation would like to invite you help prepare a master plan for Lower Daybreak Regional Park.

This undeveloped park property is an extension of Daybreak Regional Park at 26401 NE Daybreak Road between La Center and Battle Ground. The 112-acre site is located on the south bank of the East Fork Lewis River next to the boat launch on the west side of Daybreak Road. 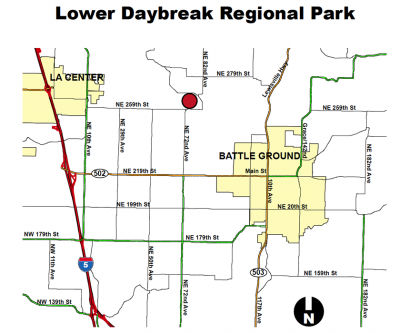 The property is relatively flat and open with some wooded side slopes. It borders the East Fork Lewis River to the north and Manley Creek runs through the south side of the property. Most of the site is currently open to the public and accessible from the boat launch parking lot.

What is a master plan?

The county must complete a master plan before development can begin. A master plan identifies a preferred mix of recreation uses and facilities that may be included on a specific park property. The county will install the features included in a master plan over time when funding and partnership opportunities are available.

How can I get involved?

Interested members of the public are invited to review and provide input on the recreational amenities being considered for this site at an upcoming public meeting. The input received will be used to develop a proposed master plan for the park, which will be presented for review and additional input at a second public meeting in December 2009.

Come to the public meeting

People who are unable to attend the public meeting can review documents and provide input electronically through the project web page starting on October 15, 2009. Comments are due by October 29, 2009.

Clark County purchased the Lower Daybreak property in partnership with the Columbia Land Trust in 2002. Vancouver-Clark Parks and Recreation Americorps Volunteer Program has partnered with Fish First on several water quality improvement and fish habitat restoration projects along Manley Creek. In addition, a grant agreement has been executed between the Lower Columbia Fish Recovery Board and Fish First to design a bank stabilization and fish habitat restoration project along this portion of the East Fork Lewis River.

This planning effort will be funded by regional real estate excise taxes, which are paid when properties are sold. These funds are dedicated to planning and developing parks in the unincorporated areas of Clark County. 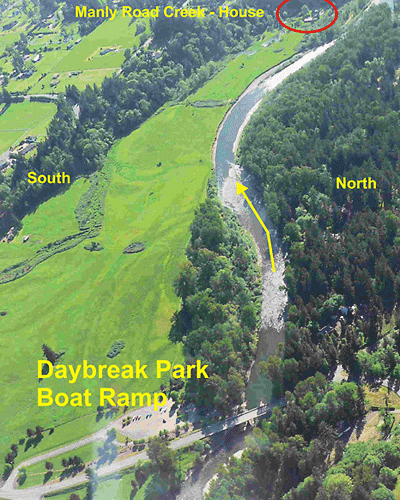 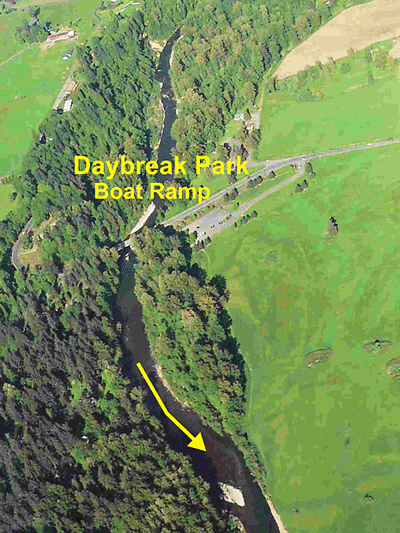 Mine reclamation required by WA DNR and Ecology has not been done since early 2000’s. These pits are not part of the proposed new expansion.

Grant is for $ 200,000 with no match required. No reimbursement of costs to Fish First or Work Team Consultants can be paid till 30% of the design is completed. Some of the Work Team members are from the LCFRB Technical Advisory Committee and there is concern about activities that have occurred that are slowing up the rate of progress.

We had hoped to get the planning finished in July of 2009 so that we could then apply for a grant to build the project in 2010. This is the 3rd year we have tried to get the project through the grant system and we are very concerned about the activities that keep slowing our progress, which could end up preventing us from getting the 2nd grant to build the Project in 2010. Land owners along the river and Clark County (a major land owner) support the project and are tired of waiting to see it get done —- and so are the fish!

This will insure a good supply of cold spring water to the fry and smolts rearing in the two ponds in the Manly Road Creek Project tributary to the East Fork L. R. 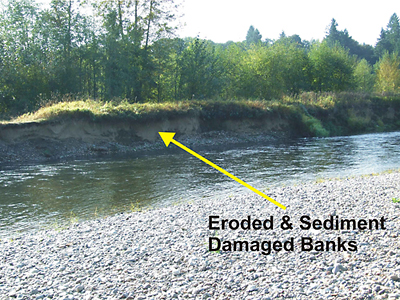 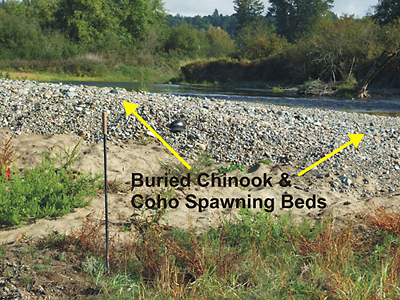