A Close Call For The East Fork

Dec. 24th, 2014: A breakthrough in avoiding a potential major impact on the upper East Fork Lewis River has been achieved thru the successful efforts of Friends of the East Fork (FOEF) to obtain funds to purchase 6 acres of streamside land between Horseshoe Falls and Sunset Falls. FOEF at the 11th hour filed an appeal against the logging that was intended to clear cut the strip of wooded riparian land between the upriver main road and the East Fork. The appeal delayed the start of logging temporarily, while we worked with the logger to negotiate a sale of the land to protect it from clear-cutting. Our appeals to County, State, and Federal Agencies received mixed reaction, much of it due to the lack of their even knowing about the proposed clearcut. 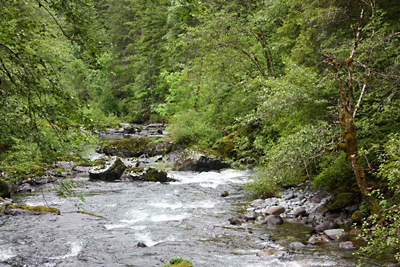 Several local organizations and individuals stepped forward to offer help purchase the land — but none had the funds on hand. Our attorney, Brent Foster, negotiated an $ 80,000.00 agreement to buy the land before the purchase deadline expired. Then, a family living along the East Fork graciously offered to buy the land and give this section of “Steelhead Sanctuary River” the full protection from degradation that is needed. We cannot thank them enough for their commitment to the river.

And we give special recognition to our attorney, Brent Foster, who tirelessly negotiated between the logger, FOEF, and the purchasing family to obtain a fair and lasting solution to protect this key section of the East Fork.

It was not only the clear cutting of riparian land which was adjacent to stream habitat where the nationally recognized strain of large steelhead hold and rear. We discovered during our investigations, that the land also had an old PCB hazardous chemical site on it, which should never be disturbed regardless of earlier WA Dept. of Ecology cleanup efforts. In addition the upper boundary of the strip of land purchased is right up against the well known Sunset Campground Complex that is managed by the US Forest Service and is part of the Gifford Pinchot National Forest. 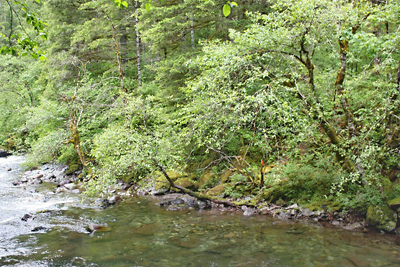 Our in-depth investigation of this whole logging permit proposal showed that this was a disaster in the making. The DNR Director (Washington Dept. of Natural Resources) had earlier issued a directive after the Oso WA. landslide, that included the need to provide better protection of riparian area as well as potential land-slide areas. The DNR should have never issued a permit to log the riparian area. It appears that neither the WA Dept. of F&W or the US Forest Service were properly informed of the proposed timber sale clearcut permit application. The sale should have never reached the point of “ready to cut” — but it did!

It was concerned citizens living along the upper East Fork that alerted FOEF and asked for our help.

Over 22 million dollars have now been spent on the East Fork to protect and improve the river, the watershed, and the 4 federally listed species of salmon and steelhead that make this river so famous. Yet this potentially egregious action almost happened. Clark County as well as the DNR were key participants in the permitting process — they can and must do much better in the future to protect this national treasure.