Clark County, WA – After many years of complaints about water pollution coming from Storedahl’s Mountain Top gravel mine and haul road on Yacolt Mountain in Clark County, Friends of the East Fork of the Lewis River (“Friends”] has filed suit in U.S. Federal District Court in Tacoma. The suit alleges that ].L. Storedahl & Sons, as well as its owners and top managers, have repeatedly violated the federal Clean Water Act by failing to prevent mine related discharges of silt, dirt, nitrates and other pollutants from entering local tributaries of the East Fork of the Lewis River. The suit also alleges years of water pollution monitoring violations, such as the failure to conduct required daily surveys for oil and grease during mining operations. 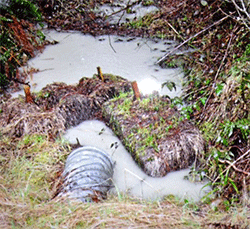 Friends brought the lawsuit after years of pollution complaints to county and state officials regarding pollution from the mine have gone unresolved. Neighbors have for years watched the creeks crossed by Storedahl’s mine haul road turn a milky white as the fine silica that comes off Storedahl’s untarped rock hauling trucks is then ﬂushed into local streams when it rains. These tributaries, including Brickie Creek, are designated habitat for multiple runs of salmon protected under the federal Endangered Species Act

“Storedahl has know about these pollution problems for years and unfortunately has elected not to seriously address them,” adds Richard Dyrland, President of Friends of the East Fork Lewis River. “These streams and the East Fork are federally designated critical habitat for multiple runs of threatened salmon and Storedahl’s actions are undermining the benefits of millions of salmon restoration dollars that have been spent in the watershed.” Friend’s attorney Thane Tienson says the case is about ensuring that Storedahl complies with state and federal law. “These types of discharges haven’t been legal for over 30 years and its long past the time when Storedahl should have addressed the pollution they are causing.”

The discharges are only the latest complaints about the mine that many neighbors also blame for damaging and polluting their drinking water wells.