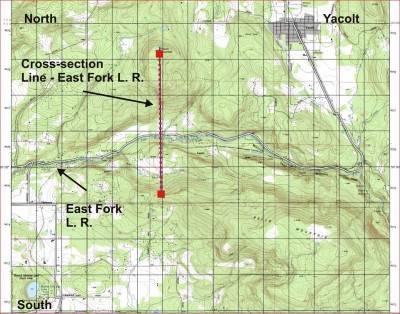 The “Draft Mining Overlay Zoned Areas” along the East Fork (which just one of several areas similar examples in Clark County) are on the steep hill and mountain sides that drain into the East Fork and the numerous tributaries that flow into it. It is not just contamination of the surface water runoff, but the groundwater too, as shown in Figures Sequence 1, 2, and 3. The geotechnical studies done on the Yacolt Mountain rock quarry site (Fig.-2) before it was permitted, strongly warned of the risks of mining blasting that would deeply fracture the rock and affect ground water flow and wells. These impacts can come from gravel and rock mining sites as far as a mile and a half away (1.5 mi.) from the stream. This is now happening to the wells around Yacolt Mountain. There is documented surface water pollution too (contact Dave Rogers 360-687-1100 for details).

Serious Pollution and Other Impacts From Locating Mining Near Streams Include:

A solution is to keep the mining overlays away from the slopes above key streams and tributaries. There are other better sites for mining overlays as the full overlay map shows. Clark County has no shortage of sand, gravel, and rock (especially when 60% of it is shipped over to the Portland area). There are roads along or leading to most of the major streams in Clark County making it easier and more efficient for the mining company — of it doesn’t have to build a road! It can use the one already paid for by citizen taxpayers — rather than having to pay for one itself.

Friends of the East Fork (FOEF) is not against mining if it is done properly, in the right location and with permits and operating agreements monitored and enforced (not currently adhered to by some mining operations in Clark County).

Or — you can contact FOEF at www.eastforklewisriver.org for more information.