Say “NO” to The Expansion of The Yacolt Mt Rock Quarry

Say “NO” to The Expansion of The Yacolt Mt Rock Quarry

The result of all of the above, property values have dropped. 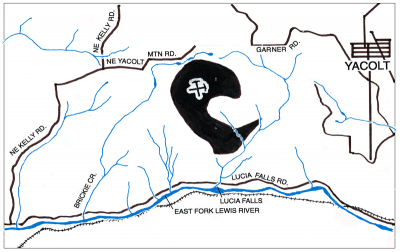 The purposed expansion of the overlay occupies the steepest, most dissected terrain, with numerous drainages that feed sediment and pollution directly into East Fork Lewis River.

WA Dept. of Fish and Wildlife have identified coho and steelhead in Brickie and other creeks below (south and southeast) Yacolt Mountain. Also, they have installed a salmon passage culvert under Lucia Falls Road on the tributary which drains the south and southwest side of the mountain from several sections inside and around the proposed overlay expansion). These areas that drain into tributary streams off the mountain, show up as very steep slopes (greater than 40%) in LiDAR Slope Images and County Hazard maps.

Add your concerns to the growing number of county citizens, who say NO!