Last December 2015 we had a large flood (approximately 50 yr.) that recorded over 20,000 cfs. at the 80 year old Heission Gage north of Battle Ground. Since then it has been followed on into the end of March with several “Bankfull” floods. The continual flooding has caused severe accelerated erosion and sedimentation in the lower East Fork with related impacts on fisheries, fish habitat, stream banks, and recreation quality. Now we are seeing unusually low flows for this time of year in the East Fork. Friends of the East Fork (FOEF) has walked and flown the lower East Fork to observe and document the flood impacts.

Loss of streambank ranged from 3.5 ft. up to about 14.0 ft. The erosion took out whole trees whose roots had been helping providing cover for fish. Most of these banks were in poor condition before the flood. An avulsion above an old flood overflow channel just above Daybreak Bridge caused numerous trees to fall into the river when flanked by flood flow. They blocked the channel, collected at the bridge, and ground thru salmon spawning beds causing much damage. The width of the river in that area increased as much as 40%. Sediment covering key fish habitat was also one of the most severe impacts. 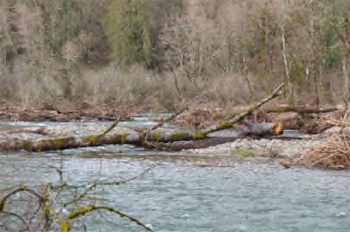 Large Trees Blocked Fishing Boats from Moving Down the River

Critical fish habitat on smaller tributary streams were less damaged. Some side-channels received sediment damage while others didn’t. The lower temperatures they provide because they are fed by ground-water, keep salmon and steelhead fry alive thru the critical summer months.

Now that the East Fork has been officially designated as a “Steelhead Legacy Stream” for genetic and related purposes. A limited amount of work has been done on the lower East Fork, it is time that much more be done. This means that more lower East Fork main channel stream and fish habitat projects receive priority for restoration grants. And, we need more side-channels that are properly designed and protected from flood flow sediment accumulation, so that steelhead and salmon fry survive thru the high summer stream temperatures. 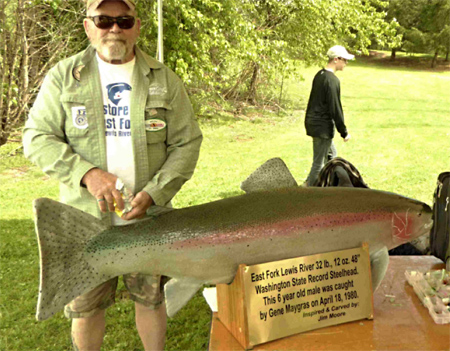